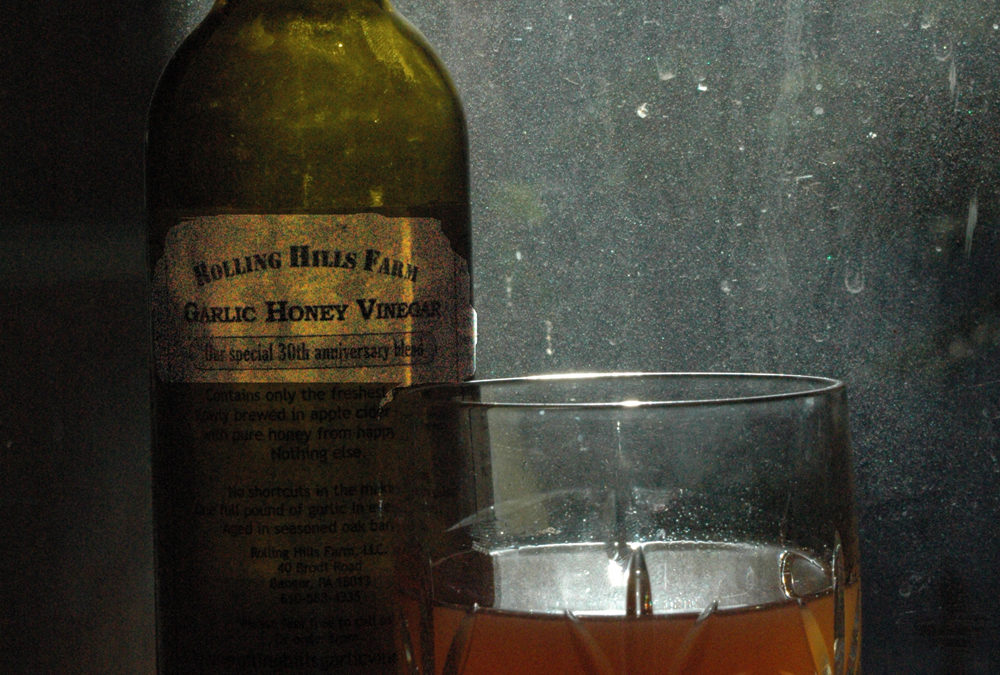 Mineral-rich glacial soil makes Pocono garlic one of the finest in the world. Robust with flavor, the hardneck garlic grown at Rolling Hills Farm adds depth and complexity to the organic cider vinegar it is brewed with.

The tranquility of Rolling Hills Farm is evident from the moment you set foot on property. Ducks and geese quack contentedly, chickens cluck and scurry. A big chocolate lab comes bouncing down the drive hailing you.

Rob Schwartz is out in the field on his tractor. He waves as a voice of greeting comes from the beautiful farmhouse and Sheila Schwartz walks with you over fields toward Rob. Past the old red barn and a row of gooseberries edging one of the fields Rob meets you with a smile and strong handshake. “Her name is Sadie,” Rob says as the dog smiles up at you. Rob and Sheila and Sadie show you around the place.

The rhubarb is beginning to sprout on the edge of a lower field, first cuttings of asparagus have been done, but it’s still early spring and the butterball potatoes aren’t up yet.

The garlic, however, is going strong. It thrives in the mineral rich glacial soil found in this region and is without question one of the finest garlics in the world. In this field under the sunlight is where Rolling Hills vinegar begins. Yes. All the garlic used in Rolling Hills vinegar is grown right here on this farm, in this soil, by these two hard working people.

Sheila explains the seed of their vinegar business was begun by her uncle Frank, Frank Pollock, the farm’s previous owner. And what began as a few cloves of garlic floating around in a bottle of cider vinegar has, through years of effort, transformed into a thriving trade.

Frank was a busy man. In addition to running the farm he became a founding member of the Monroe Farmers Market and driving force behind the Pocono Garlic Festival, an event that became so enormous so quickly it had to be relocated multiple times. Between all these obligations Frank continued to develop his garlic vinegar. Rob reminisces about sitting at Frank’s kitchen table back in the day, taste-testing secret batches of vinegar identified by number only.

We continue to walk downfield, toward the blueberry patch. It is rimmed by a spring-fed rivulet fairly teeming with watercress. Nearby a large raised bed is nursery to radishes and kale, and lettuce is beginning to pop up. It stands next to a spreading apple tree in full bloom.

Something new to bring to the farm market this year, Rob says, “We have horseradish in the corner lot across the street.”

Planted in October, this garlic winters over in the soil, then thrives in the Pocono climate. It is destined for brewing and oak aging.

This land is rich with history. Before us stands the Schwartz’s beautifully restored and renovated 1863 brick, post-and-beam farmhouse. Just behind the house stands a small whitewashed stone building: the aging room. The aroma of cider vinegar and garlic begins to fill the air as we approach. Rob beckons.

Rolling Hills Farm has been in Sheila’s family some seventy years, since it was purchased by her grandfather, Sheldon Pollock. Mr. Pollock ran the property until 1956 when he tragically passed from a heart attack. His wife and five children shouldered responsibility for the farm until son Frank became sole operator in 1974. In 1994 Rob Schwartz became Frank’s associate in Rolling Hills Garlic Vinegar, and in the late 90’s brother-in-law Steve Marenski became a full partner in the business. Rob and Sheila moved onto the farmstead in 2010, and in addition to making the place their private residence, are near restoring the acreage to the thriving produce farm it once was.

The door of the aging room swings open. “This was the original house,” explains Sheila, “built at the end of the Revolutionary War.” It is small for a dwelling but seems perfect for its present use. It is filled with barrels. The smells of garlic and vinegar permeate the air. Rob lifts open the top of a barrel and stirs with an oaken paddle.

The aroma is so complex it is difficult to describe. Not the assault one might expect from a barrel of vinegar, the first sensation is one of intense freshness, then a sharp but almost delicate smell of apple cider vinegar with wood tones. It is sublime.

The Schwartz’s use only all organic local apple cider vinegar from one specific farm to make two versions of their product, one lightly sweetened with brown sugar, the other sweetened with local honey. The honey vinegar is so smooth you can drink it.

You leave the aging room and go into the house to sit for a spell in the bright airy kitchen designed by Sheila. Rob has a table set up with hundreds of sprouting bean, pea, pepper, turnip, summer and winter squash seeds, all waiting for the season to begin. Rob shows off one of Franks prototype garlic vinegars from the early 1970s.

The year 1994 heralded two firsts in the Poconos. It marked the first Pocono Garlic Festival, and during that festival Rolling Hills Garlic Vinegar became available to the public for the first time.

And how many do they sell each year now?

“Most of it at garlic festivals in the Hudson Valley, Easton, Connecticut, and Pocono.”

Of course the variety they produce, including the vinegars, are on hand at Monroe Farmers Market. (Rolling Hills Garlic Vinegar is also available online from their website.)

You hate to leave, but with a smile Rob regales you with bottles of vinegar filled with the richness and tranquility of this place. The artisan spirit of the locale is in every drop you carry.