Laleña Stirr of Dutch Hill Preserves in Canadensis Pennsylvania knows her trees. And well she should: a field trip in second grade introduced her to the process of maple sugaring. “I’ll never forget that experience and the taste of pure maple syrup. I knew I wanted to be able to do that,” she said. 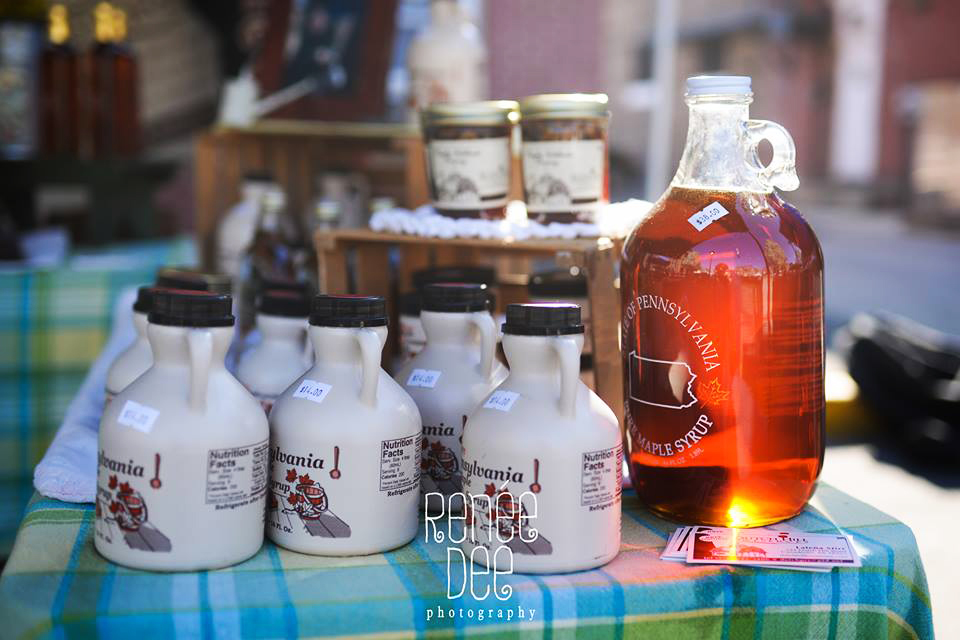 Discovered by Native Americans, maple sugar was originally produced by storing sap in large bark containers and left to frost overnight. In the morning, ice was taken off the top and discarded. After enough freeze drying occurred, the remaining juice was reduced to syrup in clay pots set over fires, a tricky business.

In professional operations today, sap is conveyed to sugar houses where it is boiled over wood-fired evaporators, concentrating and caramelizing until it achieves the flavor and amber color we know as maple syrup.

Sapping is over for this year, but was in full swing only a few weeks ago. When daytime temperatures were above freezing and nighttime temps dipped below, maple sap started “running”, as they say. Laleña and her husband Mike bored into the trunks of their sugar maples to collect sap moving up from roots to branch tips as the day warmed, and then back down as the night froze.

Winter was a bit long in the tooth this year, and temperatures did not go above freezing during the day until mid-March.

“Sugaring season got a late start due to the cold weather that wouldn’t let up,” said Laleña, who usually begins her process almost a month earlier than she was able to this year. “Maple sapping is a short season that can span anywhere from four to six weeks… eight if we’re really lucky.”

When spring arrives in earnest and the trees bud, sugar season is over. The sap structure changes and takes on the flavor of lumber when cooked. Other factors can influence taste as well. Syrup made from sap collected and left too long before boiling will be stringy and have an awful, sour taste.

But the clean flavor of Dutch Hill Preserves maple syrup is a perfection that cannot happen on its own. Full of complex caramel overtones with a buttery finish and no trace of off tastes, it can only be the result of hard work and long experience.

“We process the sap we collect very quickly and turn it into syrup. It doesn’t sit around for days,” Laleña says, her arms folded almost defiantly. “Also, we watch the weather and our trees very closely near the end of the season to catch them before they bud. The different sugar bushes can end on different days depending upon location and sun exposure, and when any of the trees bud, that section is done for the year.”

Laleña and Mike started sugaring thirteen years ago with only twenty-five buckets and taps, and have grown to two thousand taps with tubing that carries the sap directly to their sugar shack. Today the whole family is in on it, their three boys helping to stack the cords of wood needed to fire their evaporator.

Laleña is quite serious about her business, but with a smile says, “I encourage anyone with mature maple trees to make their own syrup. It’s a great experiment the whole family can get involved in!”

Cut this fudge into small pieces to make a perfect pop-in-your-mouth-pick-me-up. One tiny serving of this super rich fudge is enough to satisfy almost any craving.

Butter an 8×8 pan. Put all ingredients into a food processor and mix until smooth. Spread fudge into pan and place in freezer for about an hour. Remove from the freezer, cut into bite-sized pieces and enjoy!

Keep stored in a glass container in the freezer.